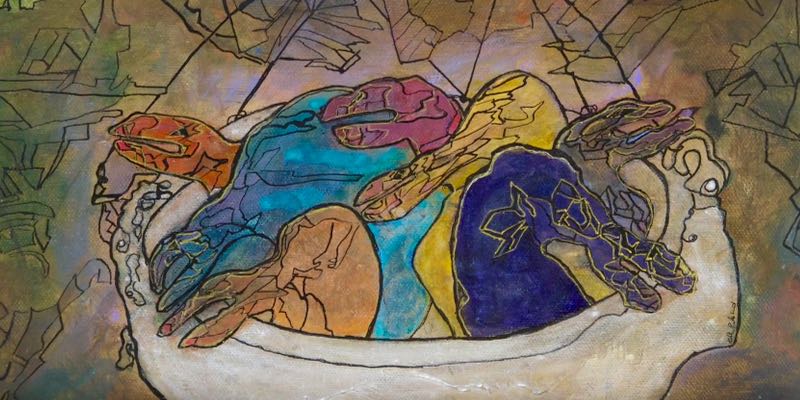 Oh, the terrain you can visit and the characters you can imagine, when you create humorous fantasy and give the ludicrous fictional characters you invent, an absurd reality! I enjoy creating fantastical satire because, by doing so, I give myself the opportunity to identify, exaggerate, and mirror problems of society which we all continue to witness around us. Satire allows me the freedom to be irreverent and, also, to identify behavior, I reject. And I can do all of this, without specifically pointing fingers at any one individual or group.

Creating humorous situations is fun, too. Depicting the sounds of a Drooma burping, provided filmmaker Eric Cosh and me with many a laugh when we worked on the accompanying 95-minute DVD to THE WORLD OF GLIMPSE! The table manners of the Drooma are atrocious! We listened to a multitude of burps before choosing the most appropriate sound effects for Graball’s “thunderous bellygrumble” and his “dyspeptic urgle“.  Like all Drooma, Graball has a “never-to-be-satisfied-appetite.” Through hyperbolized and parodied characters, satire can reveal the abundant absurdity of individual and societal behavior. The beauty of humor rooted in real-life observations, is that not only does it amuse, it can expose, also, and confirm for many, the troubling characteristics observed at times, in people as well as in leaders. Take Graball for example, the leader of the Drooma in THE WORLD OF GLIMPSE: he depicts abysmal banality, rampant greed, destructivity and incompetence. Isaac Asimov rightly state: “Violence is the last refuge of the incompetent”.

Not only is Graball avaricious and crass, he is also a despot. “Totalitarianism disallows creativity, which it considers a threat.” (HAVE YOU EVER HAD A HUNCH? The Importance of Creative Thinking.) The Drooma, unlike the Glimpsibles of THE WORLD OF GLIMPSE, are completely devoid of creativity. They have no aesthetic or productive ability whatsoever. Take their Droomousine: What techno-illogical botchery!!! …

with rusty faucets for steering,

and a cracked peep-out in the ceiling

for squashing in, squeezing out…

and spying on the Glimpsibles.