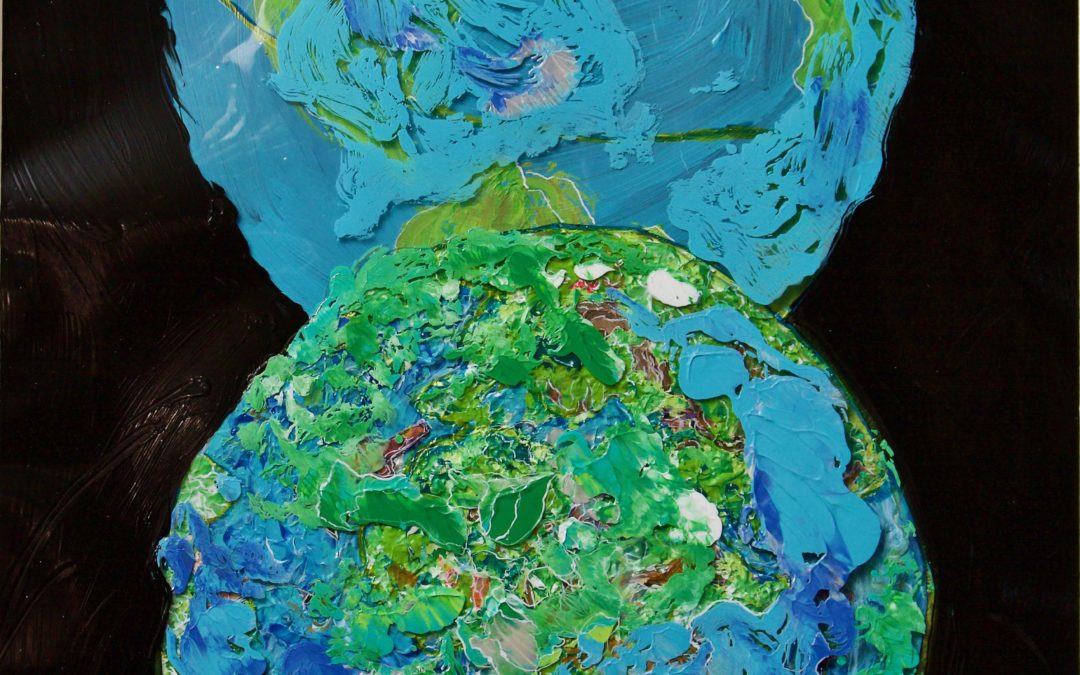 The blue color of the ocean (despite the clear color of pure water) and the blue color of the sky, are the results of white light from the sun entering both the ocean and the sky. The ocean appears to be blue because of the depth of the water – the deeper, the darker – dark navy in fact. If certain areas of the ocean have a high concentration of phytoplankton, the shades of the water will vary (or appear to vary) from blue-green to green – to aquamarine – to turquoise.

I love both aquamarine and turquoise and use both colors quite often in my paintings. They induce a certain tranquility in me as well as an elevation in my mood and spirits. I can still access the lingering awe I had felt – and still feel – when gazing at aquamarine-turquoise oceans. In Norway, I have camped next to aquamarine-turquoise winding rivers and the visual images of them as well as their seemingly magical undulating dance, remain imbedded in my mind. I do understand that the color of the actual water is clear but that is not how I saw it, or felt it or have since recreated it in my mind.

The word aquamarine is derived from the Latin phrase “water of the sea”. Also known as ultramarine, it referred to the ultraviolet lightwaves – beyond violet and beyond the sea. And it also referred to the Valley of the Stone in Afghanistan from where the pigment came.

The gem stone comes also from Brazil, Siberia, Madagascar, the United States and areas in a number of other countries. In the past, aquamarine – which is fairly similar to blue Topaz with its blue-watery green tinges – was a very expensive pigment to obtain and hence, a sign of worldliness in Christianity. It was a luxury color that gave the work of artists such as Leonardo da Vinci, a wonderful luminescence. The gem was also believed to keep people safe during long ocean voyages and is the only gemstone to have an exclusive color named after it: turquies – turkish -(traders traveled through Turkey) and turquie” in French.

I use Bright Aqua Green and Ultramarine Blue paint from a tube but sometimes, I mix green and blue and a glob of turquoise to make the color aquamarine. When I paint with turquoise, I mix cyan blue with a smaller amount of green – if I am not using Turquoise Green, Cobalt Turquoise or Teal from a tube.

I have spent a lot of time outdoors in nature, imbibing the beauty of oceans, mountains, forests, depending in what location I happened to be. I have moved into the colors of those environments and in turn, they have moved permanently into my imagination – and I use them all with some imaginative license, for example, the aquamarine, the blues, the violet and the turquoise of THE WORLD OF GLIMPSE that I wrote about and painted – a world experienced by the characters in the story  in their own personal ways: Take Spunktaneous when he reached the Lofty Lumisphere:

From high up in the Lumisphere,

The foaming He could see

He could see the Dancing Fountains pirouette, and the melting, pink snow on Jumpaloon Mountains rivulet into strawberry swirlpools.

The Whooping Clock Tower which whooped with joy every time the hour changed. He could see

He could see the Dancing Fountains pirouette, and the melting, pink snow on Jumpaloon Mountains rivulet into strawberry swirlpools…