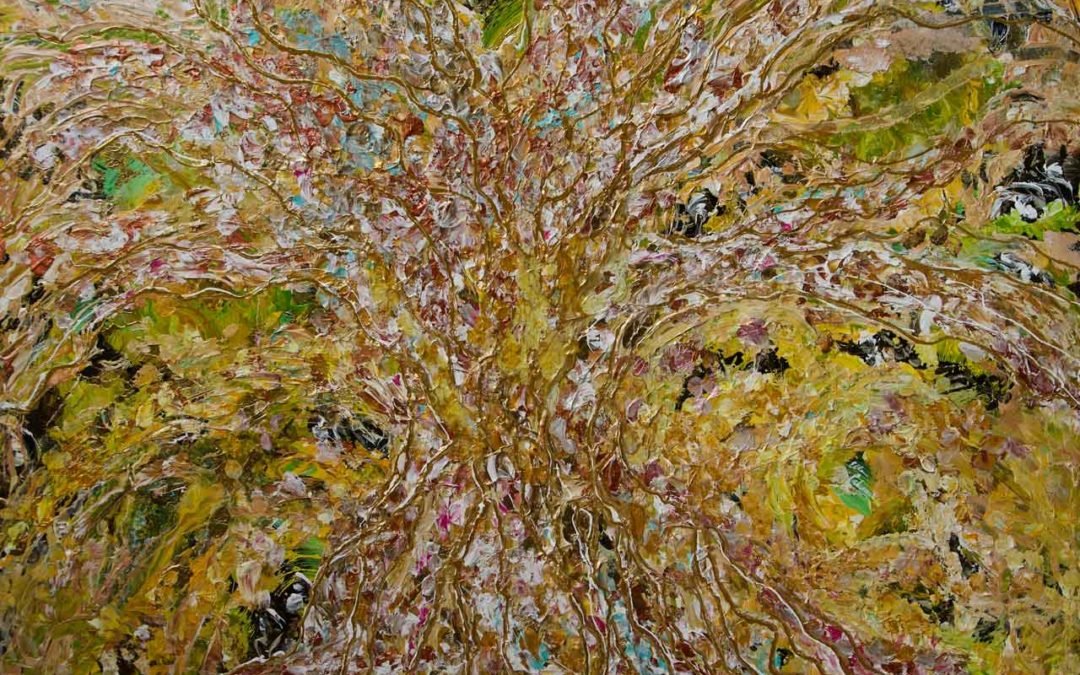 I wandered lonely as a cloud
That floats on high o’er vales and hills,
When all at once I saw a crowd,
A host, of golden daffodils…

I like to use gold paint in some of my paintings to add shimmering highlights. These iridescent, metallic shades can appear to change color and give a luminous quality to my work. But I do know that what I use as gold is not the real thing but still, it satisfies both my visual and emotional imagination.  My gold might not have the same chemical composition as the nuggets found in the veins of rocks, or in alluvial ore deposits in rivers or in the deposits of that precious metal twelve thousand feet plus beneath the ground. I fortunately, do not have to pan, sluice or drill into hard rock to find my gold because I obtain it pre-manufactured from a mix of paints with added metallic lusters that give the impression of the metallic color.  But to me, these golden, iridescent colors are added nuggets to a painting.

So although “all that glitters” on my canvas “is not gold”, for me it is. I use many shades of gold from pale gold to golden yellow to poppy gold to golden brown to iridescent and metallic gold. I sometimes make my golden hues by mixing various colors – adding white and brown to yellow, or bronze powder to yellow or combining yellow and orange – all depending on the shades I hope to achieve – the moods I want to give to the paintings. So the mythological “pot of gold at the end of the rainbow” exists for me entirely in my imagination. I also hope that it might enter the imagination of the viewer as well.

Austrian artists Gustav Klimt and Hundertwasser liked to add gold nuggets to their works. In Klimpt’s “Golden Phase” for example, he used gold and silver leaf to paint the famous 1907 “Portrait of Adele Bloch-Bauer” and Hundertwasser’s would paste gold and silver foil on his radiant colors. Gold as a valuable metal and as a color has a dominant place in many cultures throughout the world – from religious ceremonies to architectural designs to jewelry, that alluring metal has been used in different ways. Historically, religious manuscripts were illuminated by gold and silver. Gold beating gave rise to gold leafing and gilding. Shell gold which is gold powder bound in egg or Gum Arabic, was also used.

Gold – that beguiling, glittering metal, seemingly has attracted humans forever. Gold flakes have even been found in Paleolithic caves that go back to 40,000 B.C. Found all over the world, gold is mentioned in the bible, found on the top of the Egyptian pyramids, in palaces and throne rooms, in religious ceremonies, in architecture and art. For millennia, gold symbolized glory, wealth and status. Gold was and is currency and is sought after. Throughout the 1800s, there were gold rushes all over the world such as North Carolina, California, the Klondike, Australia, New Zealand, Canada, Brazil and South Africa. Where gold was discovered, settlements, towns and cities soon arose for example, Johannesburg, South Africa:

“A land of wind-roughed ridges, muddy streams and long dry grass, A land once so untouched that the gold-bearing ore which lay beneath remained concealed for so long, ore which would be adequate for many decades of mining…On this land, this summer land of blue skies and ceaseless sun, this winter land of frost and drought and sour yellowed grass, the greatest mining city ever would burst forth – Johannesburg …her mother, gold. Her father, gold. Her conception, gold.” (Ellen Palestrant, JOHANNESBURG ONE HUNDRED)

Gold as a color is evocative and our shades of perception of both it and of many others colors vary according to our experiences and how open we are to new visual influences and ideas. But most of us adapt to changes both philosophically and creatively because we know that life is not static and changes are inevitable. Our individual moodprints can affect in small and in substantial ways, changes in our individual and collective futures. So let us invite color into out thoughts and into our lives. Let the sunlight  in and bask in its glittering rays of gold. THE WORLD OF GLIMPSE:

“Do I see gold as you do, Perceptilly?”
Well, Spunktaneous…
I have a Masters Degree
In Meta-luster-cology.
I can glean a glitter from a glow.
Name all the lusters there are to know.

But Spunktaneous, I don’t know how you perceive gold…or pink…or any hue. Only you know. The colors you perceive are entirely you, and each time you look, they’re different. Depends on your moodprint which affects the glow you give to a color.