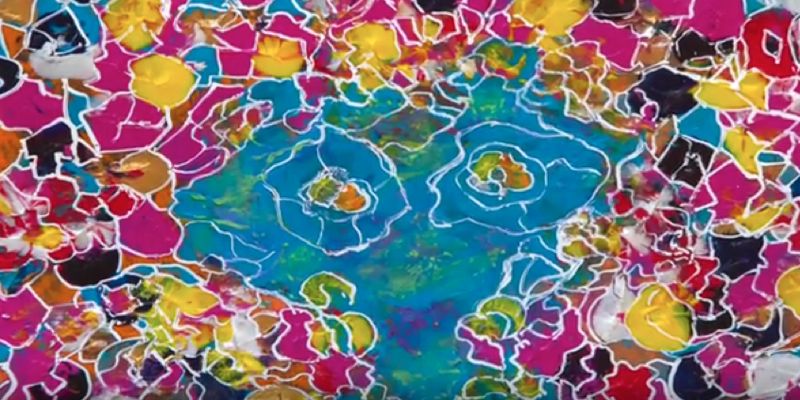 I make out a school bus…glowing orange, green, magenta, lavender, chlorine blue, every fluorescent pastel imaginable in thousands of designs.

Magenta is a beautiful name and one that is worthy of the richness of its color. How did the name originate? It wasn’t always called magenta. Here are a couple of possibilities:

The color magenta was originally called fuchsine, which was the name of a purple-pink dye. It was possibly renamed in 1859 as a celebration of the victory of the French army at the Battle of Magenta. Magenta is a town in Northern Italy. The color might also have been named after the red uniforms of the French troops.

The color also has been called mauveine which in turn is aniline purple and Perkin’s mauve. Perkins accidentally discovered this synthetic dye in 1856 when he was attempting to find a cure for malaria.

The Magenta Rose was first named in 1927. A Magenta Rose garden is beautiful to behold and the sweet fragrance of its blooms can be mood enhancing.  Have you ever been presented with a magenta rose bouquet and have you ever thought about whether those magenta-colored roses would  smell as sweet if instead, the flowers were described as being fuchsine-colored or mauveine-colored? Would a different word alter the perfume? Probably not, but the word magenta sounds so much better! It has a musical quality – magenta…center…scenta…momenta…pimento… whereas the sound of fuchsine has a rather medical connotation…fuchsine – vaccine and so on.

Magenta is actually a primary color (not red). Think of the inks you use for your computer:  black, magenta, yellow and cyan. If you mix magenta with yellow, you will get red. Henry Matisse and the Fauvist painters used magenta as did Paul Gauguin in some of his South Seas paintings.

Magenta is actually a complementary color to green so try staring at a green light and the after-image you might see will be MAGENTA!