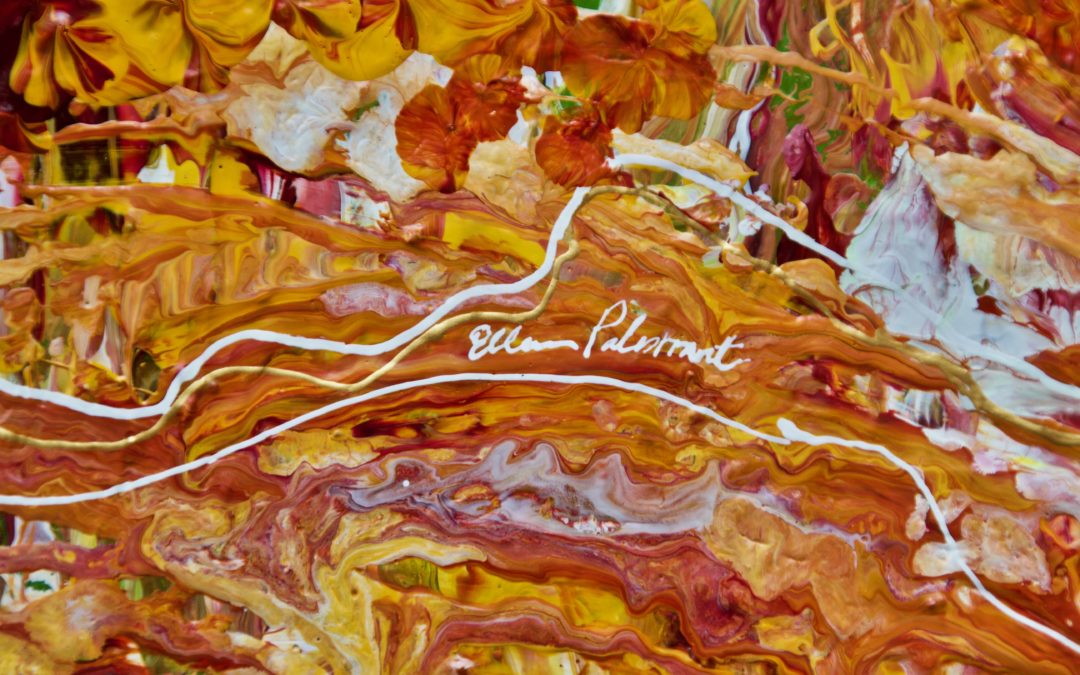 The whole thing – lit up – first in one place – then in another with flashes of lightning … I sat on the fence for a long time – just looking at the lightning.

Powerful impressions often arise from nature and as Georgia O’Keeffe describes in her experience with lightning, can embed in one’s subconscious indefinitely. At a later time, it can spring forth in creative works in both imagined – yet at the same time, remembered experiences of its initial impact. Even though later living in New York City, Georgia O’Keeffe carried with her the powerful image she had internalized of an imminent storm that she had observed with such focus as she sat on a fence watching its emotive approach. She later captured it in her painting Red and Orange Streak (1919).

Orange in the sky: we see it at sunset; we see it in surrounding vegetation and in distant mountains. Should we want to include orange in a painting, we could begin by simply mixing yellow and red together and – voila! –  we have orange! It’s a secondary color with a high visibility. Orange is the color of hot summer days, of mottled autumn leaves and of uniformly orange Halloween Pumpkins. It is the color of carrots and sweet potatoes – and the color of the paints in my box labeled “Orange”: Cadmium Orange. Cadmium Free Orange (a difference), Pyrrole Orange, Vivid Red Orange, Yellow Orange.

I use various shades of orange in my paintings and in THE WORLD OF GLIMPSE:

Farfetch, whose essence is orange, awakens Spunktaneous when his nose winds around the entrance to Spunktaneous’ room and sneezes loudly:

“The luminous, orange projection lurched forward and tickled him under his chin. “Out-of-bed! Out –of-bed! Dot of turquoise! Time to wake up” Then it hastily retracted, disappearing completely from view, before a startled Spunktaneous finished saying:

The color orange was named after the fruit orange in the early 1500s, but the fruit, actually, had originated in China in about 314 BC. Orange, in many cultures, represents spiritual transmutation. It is a symbolic color of Buddhism and Hinduism, the national color of the Netherlands and the House of Orange. It is the orange-red found within Coral and the color within the gem Fire Opal – the other colors being yellow and brilliant scarlet. Fire Opal is found in Mexico, Honduras, the United States and Australia. Orange is the orange-brown of Cinnamon and the orange-yellow of Curcumin.

I like orange – both the color and the fruit. I use orange-tinged paints quite frequently. It doesn’t have the same preeminence in art and literature as the color gold or the metal: gold, but what would a painting of Autumn look like without some dabs of orange?  A member of the New York School of Poets Frank O’Hara (1926 – 1966) set out to write about the color orange. And this is what he wrote:

I am a real poet. My poem is finished and I haven’t mentioned orange yet. It’s twelve poems,

I call it ORANGES.

What kind of a poem would you write about orange? What kind of a poem would I? I think it might be about orange sunsets or maybe about autumn or autumnal sunsets. Maybe it would be about holding a smooth and rough, round-oblong, fragrantly aromatic, orange fruit in my hands. Would it be about its juicy, fibrous segments eaten one by one? I know I wouldn’t use the word “citrus” because to me, that word doesn’t have a poetic sound. Nor does “Orange Jam”. What about  “Orange Marmalade”? Now, Marmalade is a poetic word – to me at any rate. Maybe, I will write an “Ode to Orange Marmalade”. And maybe, I will include these words: eating orange marmalade jam under mottled, orange, Autumn leaves and a blazing orange sky.

What kind of a poem would you write about orange?