THINK PINK: WHY NOT PAINT YOUR OWN WORLD OF COLOR? 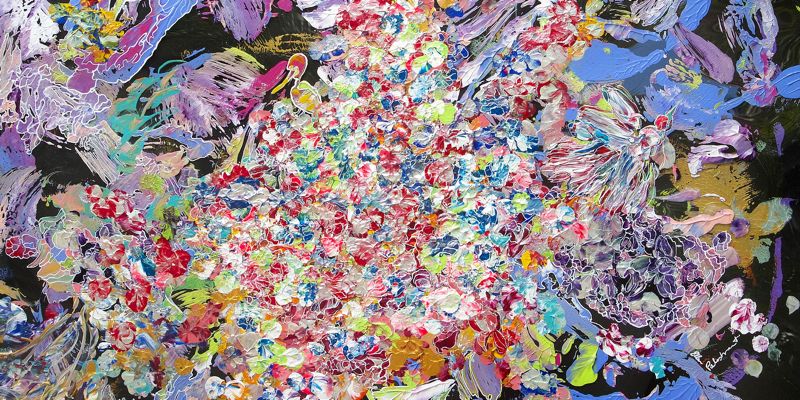 The colors live a remarkable life of their own after they have been applied to the canvas.

I love colors – most colors – and some, like pink, seem to appear quite often in my paintings. Pink pops into my imaginative writing, too, telling me to think pink! – and I do.

Is pink the uninvited guest who arrives without an invitation into my imagination, onto my canvases or into my stories? Or am I the one who invites pink in? I think it’s the latter simply because I am partial to pink!

The first line of Chapter One of THE WORLD OF GLIMPSE opens with:

It was five to pink…

Spunktaneous flew high in the any-colored sky as it changed from red to pink.

In Glimpse, depending on the time of day or night, the sky could be any-colored.

It also could have any luster.

According to the transmission of a particular Glimpsible mood, it could glow as brightly as a new thought,

or be as dull as dripe.

Pink to me can never be as dull as dripe. In fact, I invite it into and onto my paintings because of its ability to brighten, soften – and give mood-enhancing aha moments to me and to all who might see its unique contributions.

When I see pink in nature, I feel drawn to the foliage or the environment it dapples with its hue. I notice it also perhaps, because pink is not an abundant color in nature. While it draws attention to itself without demanding it, it also highlights the various hues of the juxtaposing, surrounding and crisscrossing colors.

Think pink and you’ll begin to notice its relevant contributions as it stands quite unconcerned about the fact that it doesn’t even have a place in the spectrum – just in our minds. Yes, pink doesn’t exist in the rainbow unless you conjure up an imaginary rainbow, perhaps one with all shades of pink rays – blush, cherry blossom pink, coral pink, magenta, orchid pink, ultra pink, shocking pink, fluorescent pink. Now that would be an awe-inspiring rainbow!

There are so many variations of the color pink for you to use in your creative work. Just think about the hues of pink in flowers and spring blossoms and how emotive their appearance can be. Think about cherry blossoms, pink tulips, carnations, camellias and fuchsias. What about flamencos (even though they’re not naturally pink – their diet of brine and blue-green algae contains a natural pink dye called canthaxanthin).

Claude Monet chose pink for the walls of his house in Geverney. Just as he chose to use pink in his paintings, so did many other Impressionists and Neo-Impressionists choose to use pink in their art. Think about the pinks used in Degas’ dancers. But, on the other hand, is the association with and an affinity for pink too feminine?

Not at all, especially as today, colors are fairly gender neutral. It was only from about the 1940s that pink became associated with girls and blue with boys. But that wasn’t always the case: a June 1918 article in the LADIES’ HOME JOURNAL, stated: “The generally accepted rule is pink for the boys and blue for the girls. The reason is that pink, being a more decided and stronger color, is more suitable for the boy, while blue which is more delicate and dainty, is prettier for the girl.”

Well I think pink is particularly pretty – or should I say, spectacular – especially, for the sky! So thinklink into pink! Just try it for twenty-four hours – from Pink O’Clock to Pink O’Clock the next day.