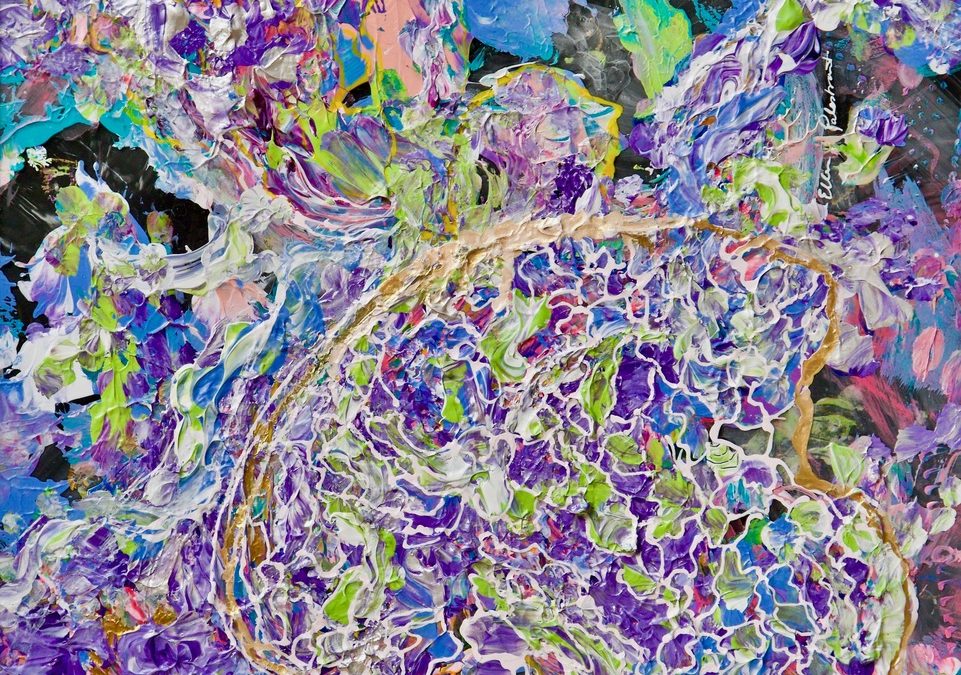 I NEVER saw a Purple Cow;

I never hope to See One;

But I can Tell you, Anyhow,

I’d rather See than Be One.

If I decide to paint a purple cow, or a purple hippo or elephant, I might hesitate for just a few moments to decide which shade of purple to select from the many I have in my paint box labeled “Purple” – and then I would simply choose the shade that feels right to me after experimenting with a number of those pre-mixed paints that come right out of the tubes –  hues such as Dioxazine Purple and Brilliant Purple. I might dilute these paints with white or with Pthalo Blue. On the other hand, I might want to make the color myself.

I could make a really good purple with red and blue paints but to prevent it from becoming somewhat brown or gray, I would make sure there are no pigments of yellow or green in the paints. I might then want to adjust the shade more to my liking by perhaps adding some white or some more red.

Purple, historically, was – and still is – a rather serious, regal, ecclesiastical color. Purple was worn by the Holy Roman and Byzantine Empire rulers. Roman Emperor Nero, in the first century AD, wore purple but declared that anyone caught wearing it would be put to death. Purple was an imperial color worn also by Roman Catholic Bishops. The color is also associated with magic and mystery – and wisdom.

Although purple is an ancient color dating back to biblical times and before, the dye used today was discovered quite accidentally when in 1856, Londoner William Henry Perkin found what he called, “ a strangely beautiful color” in the residue from his experiment to make a synthetic form of the malaria remedy, Quinine. He named it Tyrian purple and soon opened a family business – a dye factory. By the time he was twenty-one years of age, he was a very rich man.

Purple remains an evocative color. One need just think of Georgia’ O’Keeffe’s “Purple Leaves” and her “Purple Petunias.” Think also about Henri Matisse’s “Purple Robe and Anenomes” and his “Woman in a Purple Coat.” Think about Mark Rothko’s purple panels in “The Rothko Chapel” in Houston Texas.

Purple is not a spectral color like violet even though to the human eye they look similar. Violet objects are not at the same time red and blue whereas purple objects are. So although there are similarities in both colors, there are also difference and therefore violet will have its own blog as will its cousins, lavender and lilac.

I started this blog with Gelett Burgess’s “Purple Cow” which he first published in in 1895 in his magazine, The Lark. It became one of the most quoted poems in the United States, something that did not please Burgess at all.

But I can tell you Anyhow

I’ll Kill you if you Quote it!